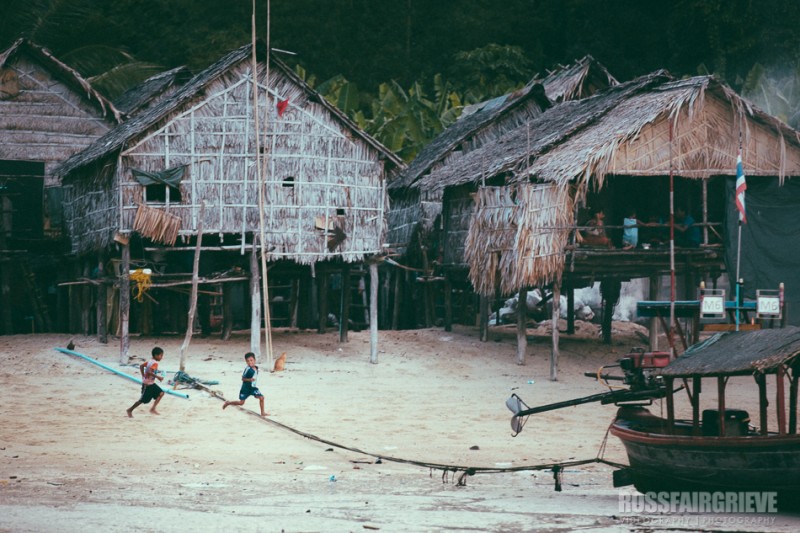 Back in May 2012, I received a very short but very interesting email. That email came from Marco Reinard, a producer and environmental campaigner, who wanted to know if I’d be interested in filming a documentary project that he was working on. The project was to centre around indigenous groups, how their lives are changing (for better and worse), and what we can learn from the way that they live. The documentary film itself is still in post-production but I’ve posted a bunch of photographs from part of the project, at the bottom of this page.

The pilot for the documentary was to centre around the Moken people, a traditionally nomadic sea-faring group, many of whom have now settled in Thailand and Myanmar (or Burma if you’re old-school). The Moken people came to the wider world’s attention after the Boxing Day Tsunami of 2004. While huge numbers of Thai and western people were wiped out, the Moken suffered very little loss of life. When the water started to retreat before the Tsunami surged in, they knew what was coming and immediately retreated to higher ground. This renown for wisdom has changed the lives of the Moken people on Koh Surin. Tourist interest has seen a massive surge, bringing with it economic benefits but also disruption to their traditional way of life. We visited two Moken settlements. The first was in Rawai on the large island of Phuket, well-trodden by tourists and Tesco. The second population were on the small and largely uninhabited island of Koh Surin, a national park about 18 hours sail from Phuket. We were keen to find out what members of these two populations, that lived in very different surroundings, thought about life as Moken.

In April 2013, I finally found myself at the end of Rawai pier, lugging my camera and body aboard the 60ft schooner “Atlanta”; the crew’s home for the next few weeks and the same boat that plucked billionaire Steve Fossett from the Coral Sea in 1998, after his failed attempt to circumnavigate the globe by hot air balloon. We worked with a small production crew; Marco as producer, Julian our project writer, Erick as sound recordist, and myself as cameraman. We were very comprehensively supported by the indomitable captain of the Atlanta – Laurie Piper, and his lovely wife Nim who acted as translator and interviewer, and also cooked some incredible meals on-board!

I don’t want to steal too much of the film’s thunder by telling you exactly what happened, but here are a few stills that I took while we were filming the Koh Surin part of the doc.