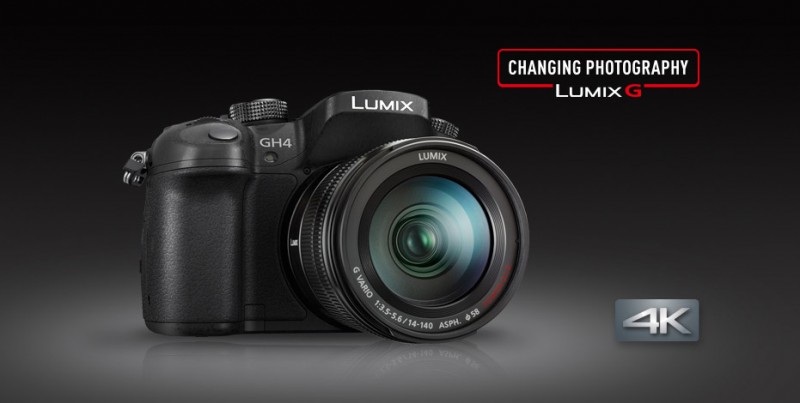 A few weeks ago, Panasonic announced their GH4 camera. Capable of shooting 4K and Ultra-HD video, with four times the resolution of 1080p (or “full-HD”), this camera got a lot of shooters, myself included, pretty excited. In fact, I got so excited, that I pre-ordered two of them.

Now, it’s worth me stating very clearly at this point that I haven’t used either of these cameras yet, in fact, I haven’t even touched or seen them, so I’m not going to be giving a detailed appraisal of the image quality of each. There’s a little bit of footage out there already from each camera. Andrew Reid over on EOSHD has shown us some really interesting stuff using a pre-production GH4 (see here, here, here and here) and Den Lennie of F-stop Academy has posted some nice footage from a pre-production Sony a7s (see here). I’m not going to go too crazy analyzing Andrew and Den’s footage and I’m not going to steal their traffic by re-embedding their videos, but do head over to their sites and have a look for yourself.

So, the Panasonic GH4 and Sony a7s are basically the same, right? Well, not really. They’re both small cameras that shoot 4K video but they do it in very different ways. 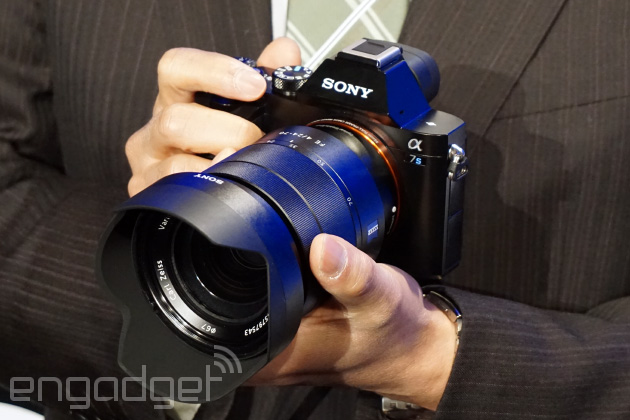 I’m really excited about the Panasonic GH4. I still own a couple of GH2’s and, while I normally pick up my Canon’s and I passed on the GH3, I’m very seriously considering the switch back over to Panasonic with the GH4. The Panasonic GH4 shoots full, cinema 4K (4096 x 2160 pixels) and “Ultra-HD” (3840 x 2160 pixels…exactly four times the area of 1080p) internally, to very fast (and pretty expensive) SD cards. This internal 4K is recorded in 8-bit colour depth giving 256 shades of Red, Green and Blue, at 4:2:0 colour resolution (see THIS ARTICLE for a bit more info about colour sub-sampling). It can also output these resolutions through the HDMI port to an external recorder (we’ll get onto those later). This bumps the colour depth up to 10-bit, allowing 1,024 different shades of Red, Green and Blue for smoother colour gradation and less “banding”, and also increases the colour sampling to 4:2:2.

The Sony a7s doesn’t record any kind of 4K or Ultra-HD footage in-camera at all. To do this, you HAVE to use an external recorder and, to make matters worse, the Atomos Shogun, the only currently-announced recorder that doesn’t have to be plugged into the wall, isn’t going to be available until the end of Q3 or the start of Q4 2014 (I’d guess around September/October time if all goes to plan).

The footage recorded to the card in the a7s is 1080p, 8-bit, 4:2:0. By using an external recorder, you can capture Ultra-HD footage (I’m not yet sure if you can capture true 4K or “only” UHD) with 4:2:2 colour sampling. It’s worth noting that, unlike the GH4, the signal that comes out of the a7s’ HDMI port is 8-bit only; even when using a recorder that can capture 10-bit footage, you will only get 8-bit. This can be important when really trying to maximise dynamic range using very flat picture profiles, as spreading those 256 values over a very wide range can result in ugly banding in the footage. Whether this proves to be a problem or not, remains to be seen.

Both cameras take an equally different approach to sensor size and resolution. The Panasonic GH4 uses a 16 (ish) megapixel, Micro Four-Thirds sensor. The Sony a7s uses a full-frame sensor, roughly twice the width and height, or four times the physical area, of the one in the GH4. Sony have also chosen to use a comparatively low sensor resolution of 12 megapixels. I really applaud this decision by Sony. Going against the “megapixel race” is a risky strategy from a marketing perspective (a lower number is worse, right?!), but something that many people, myself included, have been wishing would happen for ages! Reducing the megapixel count increases the physical size of each pixel. This means that each pixel can suck in more light, making the camera far more sensitive when light levels start to drop (the “s” in a7s actually stands for “sensitive”). Bigger pixels also tend to mean wider “dynamic range”, allowing the camera to capture a wide range of subjects- from the darkest darks to the brightest whites- in the same image. This wide dynamic range can really contribute to a nice “film look”. The only down-side of this lower resolution is really for those who want to make huge prints from their still photos. They’re probably best to stick with Sony’s 36 megapixel a7r, but for the rest of us who only print up to A3-ish prints, 12 megapixels is normally plenty.

The smaller sensor in the GH4, with its higher resolution, has much smaller pixels so the Sony a7s is likely to be a fair bit cleaner in low light. I do think it’s worth a reality check on this, though. Andrew’s GH4 low light tests over on EOSHD looked pretty positive. To my eye, the GH4 didn’t look far off the Canon 5D Mark III in Magic Lantern raw mode; a camera which I think is a great low-light shooter. The GH4 also looked streets ahead of the GH3 in low light. I’m sure the a7s will be a mind-blowingly good low-light camera, but will the GH4 be good enough for 95% of things? I guess we’ll find out soon.

That full-frame sensor in the a7s is definitely going to result in shallower depth of field. Personally, I’m not an extreme shallow depth of field junky when it comes to video and you won’t often catch me at 85mm and f/1.2. It’s just not a look that I’m a big fan of and I think it’s become a bit clichéd. However, I do like a nice soft background as much as the next guy and this comes a lot more conveniently on the a7s than on the GH4. On an a7s, even a relatively slow, f/4 lens will give you a decent amount of separation between you subject and the background in a lot of circumstances. This, coupled with what we expect to be exceptional low light performance, could mean that you could pop a nice 24-105mm f/4 zoom lens (with an image stabiliser) on the camera and shoot away. To get the same depth of field on the GH4, you’d be looking at shooting at around f/1.8 to f/2 which is into prime lens territory. This is going to mean a lot more lens changes and a lot more time to get your shots. Sometimes, that’s not a problem but, if you do a lot of run-and-gun shooting where time is tight, it might become a factor.

There are ways around this. The Metabones Speedbooster allows you to use Nikon lenses on your GH4 and, using this, an f/2.8 zoom would give you pretty similar depth of field to an f/4 zoom on the Sony a7s. However, there isn’t yet a Canon version of the Metabones Speedbooster and the Nikon version doesn’t support image stabilisation (or Vibration Reduction if you speak Nikon). The only way to get an image stabilised, general purpose zoom lens on the GH4 at the moment, is to use the Panasonic 12-35mm f/2.8, giving you roughly similar field of view and depth of field characteristics to a 27-80mm f/6.3 on the a7s. It’s alright, but it’s not great.

For me, if Metabones release a Canon EF to Micro 4/3 version of their Speedbooster that supports image stabilisation, this concern evaporates. Just buy a Canon 17-55mm f/2.8 IS, pop it on the Speedbooster and crack on!

To be honest, this gets into the realms of wild speculation. I’d imagine that the low light quality from the a7s will be spectacular while that from the GH4 will probably be pretty similar to the GH3; not awful but nothing special. I’d imagine that the same will go for the dynamic range, while I expect this to be pretty spectacular in the a7s. The 36 megapixel Sony sensor in their a7r (and also in the Nikon D800 I believe) packs a very impressive 14 stops of dynamic range. If they can do that with a 36MP sensor, what can they do with a 12MP one?!

There’s also a bit of a lack of third-party accessories for the Panasonic’s Micro 4/3 format. For example, I’d love to see Phottix release a Micro 4/3 version of their Odin radio flash triggers which I use and love with my Canon gear. Panasonic did announce their DMW-FL580L flash alongside the GH4, though I haven’t heard much more about it. That features wireless triggering (by radio I think) so might fill that particular hole, albeit at a fairly heft price tag.

Also, having said that I’m not a shallow depth of field junky, I do tend to shoot wide open more often when taking stills. There are certain full-frame “looks” that I love and that I would miss if moved to the Micro 4/3 format. For example, you can’t mimic the look for a 24mm f/1.4, wide open on a full-frame sensor. It’s just cool!

Both cameras have a whole host of other features that might be important to you. The GH4 shoots 1080p slow motion at up to 96fps while the Sony a7s does 120fps but only at the lower resolution of 720p. I’ve seen a little bit of the 96fps footage from the GH4 and no slow-mo at all from the a7s, so it’s still too early to know how these modes will actually hold up.

Both cameras have an optional interface box. The DMW-YAGH, a brick of a thing for the GH4 that requires external power, gives it timecode-in, SDI ports and XLR audio ports. There’s a similar, but much more ergonomically-friendly-looking adapter for the a7s (which I think is THIS) to give it XLR audio ports and a top mic. For my purposes, I think I’d just stick to my JuicedLink Riggy Micro for audio and my Atomos Connect HDMI-to-SDI convertor (albeit, that can’t do 4K…I assume). The timecode-in on the GH4 is a nice touch.

Well, I can’t really make your mind up for you I’m afraid! At the moment, I’m leaning towards the GH4 on specs alone, especially if Metabones bring out a Canon EF Speedbooster for it. I like the idea of being able to shoot 4K in a small package, with the ability to build it up for extra quality, only when I need to, and the EOSHD footage looks pretty damn nice! I do really like Sony’s low-megapixel, big-pixel approach and I could yet be swayed if the image is right. The lack of internal 4K is disappointing but I’m sure we’ll see plenty of 4K recorders coming onto the market in the not too distant future.

It’s an exciting time for us camera geeks!