As a photographer or filmmaker, it’s always great to work with someone that appreciates the value of doing things a little differently. Michael Darren, personal trainer and founder of Train to your Environment, certainly does that. 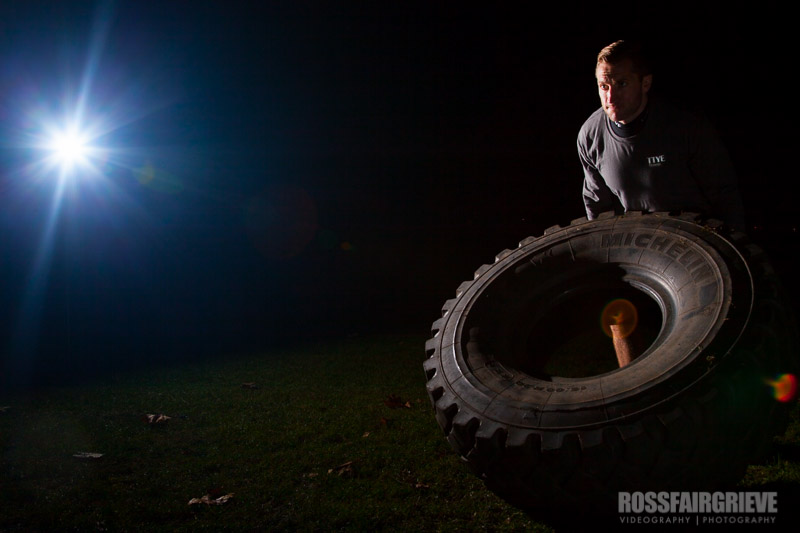 Because tyres won’t flip themselves…

The idea behind Train to Your Environment (TTYE for short), is that you don’t have to be plodding along on a treadmill or doing reps with a barbell to being getting fit. Michael often uses the surroundings or non-standard pieces of kit to make training sessions not only much more fun, but also much more effective. With this in mind, we set out to show this aspect of TTYE and what really sets apart Michaels approach from “normal training”.

We started off with a (very rainy) location recce around Michael’s hometown of Windsor in Berkshire. Michael had some great ideas for places that we could film to get a real mix of settings, from a typical gym environment, through to a gritty urban location and a serene woodland complete with waterfall!

The first location that we chose was around the lake at Virginia Water. We had found a great little spot; a waterfall surrounded by trees in full autumn colours, with an enormous lake 50 metres away, and it gave us huge scope to get all sorts of shots:

Next, we moved onto our second location. While TTYE does specialise in alternative training to spice things up, Michael does also offer gym-based training, still incorporating lots of interesting and unusual training methods. It was important to get this across so we headed over to FiveStar Health and Fitness in Windsor to finish up our first day of shooting.

As well as being a personal trainer, Michael’s also a very keen rugby player, so, the first location for day two was Home Park, the ground of Windsor Rugby Club for whom Michael plays. During the location recce, we had found a great, character-filled tunnel with really gnarled old brickwork that was just begging to be photographed! It also gave us a chance to get a couple of nice head-shots for TTYE’s Twitter accounts, Facebook pages and for Michael’s mum’s mantelpiece (probably).

Next, we moved into the park itself. There were a few groups of trees that were in full autumn colour so we got a few warm, “outdoors-y” shots using natural light. We also found a huge log and a massive concrete block. “What do you do with a huge log and massive concrete block?”, I hear you ask. Pick them up, of course! In the same way that lifting free weights is widely seen as a more functional form of resistance training than using weights machines, Michael’s a strong proponent of “odd object training”. Exercising with objects that are tricky to handle is great way of increasing your real-world strength, rather than just getting good at the chest press machine in the gym, and rubbish at everything else!

As afternoon turned to evening, an this was where the tyre flipping came in! I had been really looking forward to this and had a pretty clear image in my head of what I wanted to do. The idea was to go for a really low-key look, letting most of the shot fall away to darkness and using carefully placed flashes to pick out the important details; Michael’s face, the tread of the tyre, maybe a hint of grass here and there.

Our final stop was set to be a night-time shoot under the Queen Elizabeth II bridge, again in Windsor. There’s an amazing mural that runs the whole width of the bridge and we wanted to use this to add to the slightly surreal feeling that a sequence (overlaying several photos to show an action) can have. We also wanted to use the general surroundings to give a gritty, urban feel to a few photos.

And that was a wrap! We covered a lot of very different types of location and very different styles of photography over the course of the shoot. I’d love to hear what you think of them and which are your favourite shots from the session, so do let me know in the comments section at the bottom of this post. Michael and I are going to be meeting up again to shoot at a couple of other, completely different locations. I’m REALLY excited about one of them but I can’t tell you what it is just yet as it’s all a bit of a secret for now. Keep an eye on the blog or hit the Facebook “Like” button and you’ll see the shots pop up on there soon.

Until then, keep picking up weird stuff.