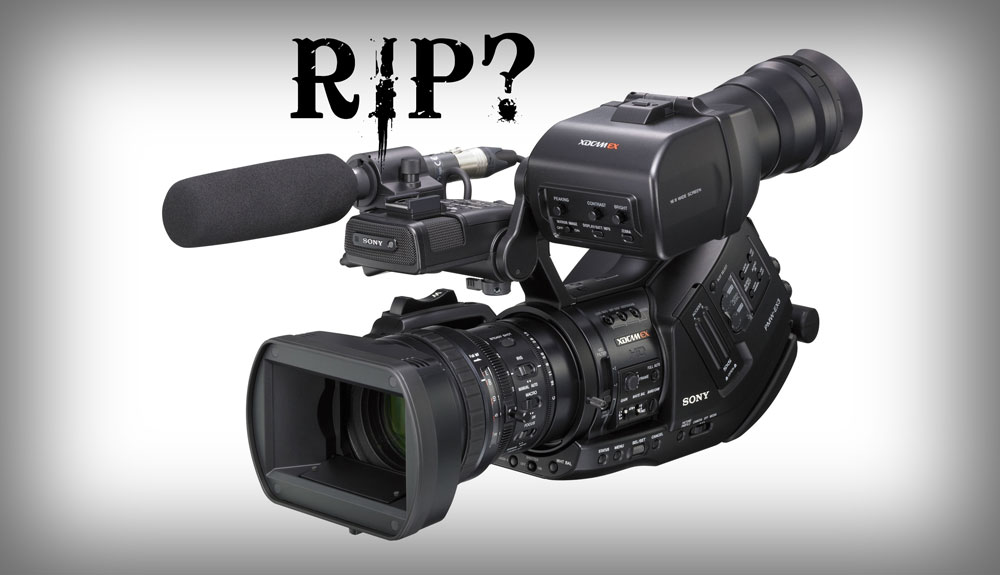 If you’re into video production and your address doesn’t feature the words “arse end of…” you can’t have missed the proliferation of affordable, large-sensor video cameras over the last year or four. DSLRs, covering both photography and video with admirable aplomb, have really brought large-sensor video cameras out from under the pile of money that they used to hide in, and into the hands of those of us whom the bank manager doesn’t send Christmas cards to.

While the Nikon D90 was technically the first video-capable DSLR camera, sheepishly dipping its big toe into the water of video production, it was the Canon 5D Mark II

that barged past it, doing the marketing equivalent of a screaming, naked, running bomb that nobody could fail to notice. 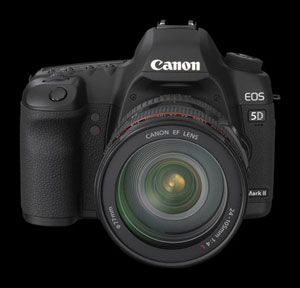 Even Canon didn’t seem to realise what they were unleashing. What started as a stills camera that happened to be able to take a bit of video, became a genuine piece of professional film-making equipment that has since been used on TV and film productions from House to The Avengers. Only five years ago, a 1080p high definition, large-sensor video camera with the quality of the Canon 5D Mark II

would have set you back about as much as your house. If that’s still the case, you might want to consider moving.

So, are small-sensor professional video cameras dead? After all, they can’t get that beautifully cinematic shallow depth of field (sharp subjects with blurred backgrounds) that’s such a draw of large-sensor cameras like the full-frame Canon 5D Mark III and 1DX or the Nikon D800 and D4 (and maybe Nikon D600 soon if the rumour mill is to be believed). They also can’t compete when it comes to low light performance. Are they just old tech now?

In short, no. You won’t wake up tomorrow to find that trying to make films with a small-sensor video camera is as futile as England taking part in ANOTHER BLOODY PENALTY SHOOT-OUT. The case could be made, however, for small-sensor video cameras starting to become marginalised as speciality cameras, with their large-sensor equivalents taking over more and more of the standard, day to day video work.

Now, I realise that that’s going to raise more eyebrows in certain video production circles than if I had just leaked a sex tape featuring myself and online filmmaking royalty, Philip Bloom, doing unspeakable things to a pre-production Canon 5D Mark IV, so let me back that up with my five reasons for wondering whether small-sensor video cameras might have had their day:

1) DSLRs were just the beginning

The video DSLR didn’t so much lift the lid on the affordable “film look” as rip it off entirely and use it as a dinner plate to serve a romantic meal to the small-sensor camcorder’s girlfriend. Video-capable DSLRs completely changed modern, professional videography and filmmaking. They were, however, just the beginning. Being designed and built principally for still photography, they were and still are a bit of an ergonomic nightmare when it comes to filming. The form factor is as awkward as realising that you’ve been talking to your Mum on a telephone number you found stuck to the wall of a phone box, and DSLRs are still missing a lot of features that are very useful for professional film and video production; things like XLR microphone inputs and built-in neutral density filters. Of course, DSLRs can be used for professional video production and film making but there’s a lot of fiddling and bolting on of accessories required to make them really user-friendly. [I feel like I’m hyphenating the crap out of this article…have I gone mad with the grammar gun!?]

DSLRs have, however, spawned a new breed of affordable, large-sensor video camera. The Panasonic AF100

and the upcoming Sony NEX-FS700 for example, really do tick virtually all of the boxes that DSLRs left unchecked, in a form factor more suited to video. [On a side note, I haven’t had a chance to use an FS700 yet but I do have a poster of it on my bedroom wall that I kiss before I go to bed and occasionally sing Leann Rimmes songs to using a hairbrush as a microphone. Needless to say, I quite like the look of it.] 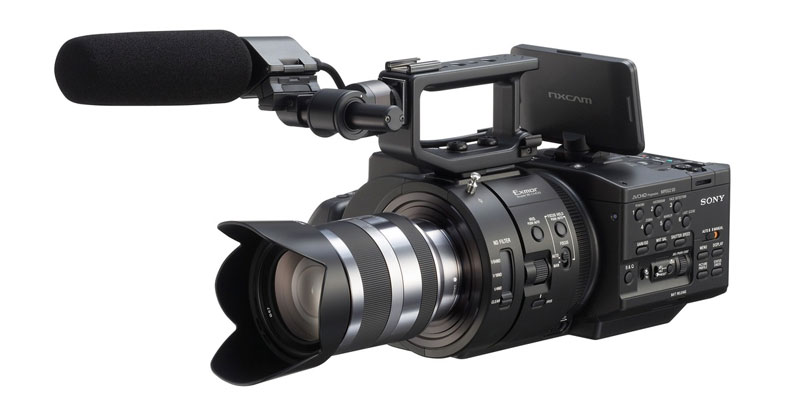 2) Clients are starting to expect the “film look”

When professional videographers started filming commercially with DSLRs, a lot of clients were baffled, often exclaiming, “you’re meant to be doing video not photos”. Over time, DSLRs have almost become the norm and, when clients see the cameras’ ability to produce beautifully smooth tones and cinematic, shallow depth of field, it quickly turns into, “Ooo, it looks like a movie!” I’m not going to start the conversation about whether shallow depth of field has been overused or not but it is a very recognisable look and one that can be very appealing when used properly.

Short of fiddling with expensive 35mm adapters for your small-sensor camcorder, it’s more or less impossible to get this film look. The last thing you want to hear is, “I REALLY love the video that you made but the last guy just made it look more…well…film-y”.

3) But what if I want DEEP depth of field for easy focus?

So we know that a smaller sensor means that you’ll struggle to get that cinema-like shallow depth of field but this shallow depth of field can be a pain in the arse too. Try keeping a moving subject in focus at f/1.2 on a full-frame Canon 5D Mark III or Nikon D800 and you’ll know what I mean. Traditional wisdom therefore suggests that, in situations where focus might be tricky, a small-sensor video camera would be a better option than a large-sensor camera. Is that really true though? All things being equal (sensor resolution, aperture, ISO etc) a large-sensor video camera has shallower depth of field than a small sensor camera when they’re at the same equivalent focal length (i.e. when a shot is framed up in the same way and from the same point). But, and this is a Nicki Minaj sized but, the large-sensor camera will give a far cleaner image at higher ISO values owing to its larger pixels. That means that, in practice, you can gain back an awful lot of that “lost” depth of field by closing down the aperture on the large sensor camera and cranking up the ISO (or gain) to compensate for the loss of light. If you cranked up the ISO on the small-sensor video camera, its physically smaller pixels would result in far worse quality than on the large-sensor camcorder. 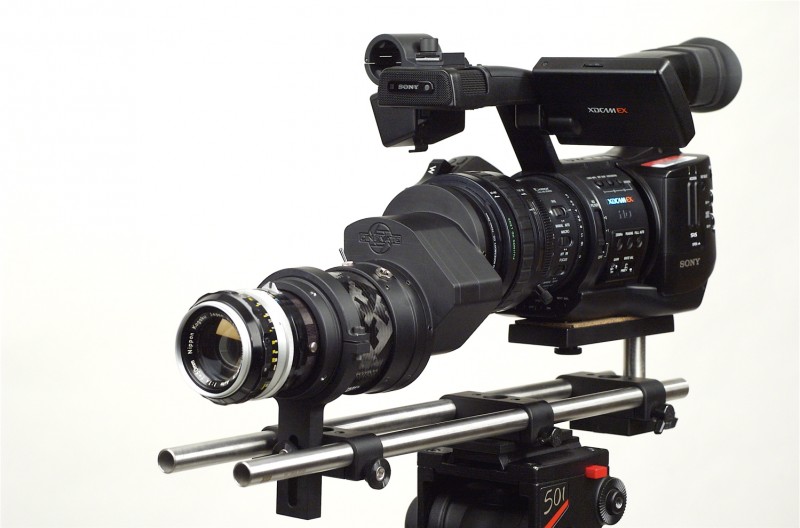 A Sony EX1 1/2" camcorder rigged up for large-sensor-like shallow depth of field. That's a lot of gizmo-age! Image Source: www.dvxuser.com

As a filmmaker you’ll find yourself, at some point, in a situation where light levels are getting really low. Providing you’ve got fast lenses with a wide maximum aperture, you’ll be glad of that large sensor with its big pixels. Sure, the depth of focus might be paper thin but, if you can cope with that, you’ll be able to film in low light conditions under which your small-sensor video camera would have made that candlelit evening event look like someone had released a swarm of colourful bees into a coal cellar.

Like it or not, “high definition” is not going to end at the current standard of 1920 x 1080 pixels (1080p). Already, 4k, with a resolution equivalent to roughly four 1080p frames placed in a 2 x 2 grid, is well-entrenched in movie production and is making headway into smaller-scale, professional video production. Over in the consumer stills world, we’ve seen the megapixel race, where 16+ megapixels have been crammed onto a teeny, tiny sensor, often making the image significantly worse than it would have been had the resolution been something a little more reasonable, especially when it comes to low-light shooting. When 4k does really get its foot in the door, the sensors in our video cameras will become an awful lot busier with far smaller pixels. Small-sensor HD video cameras struggle a bit in low light as it is. Making the pixels four times smaller is not going to make this any better!

All of the above might have led you to believe that I’m very anti small-sensor video cameras but I’m really not. As it stands, they still have some real advantages in certain situations. The first of these advantages is size and convenience. As the lenses need to cover a far smaller sensor area, a single, very versatile, wide aperture lens with a very wide zoom range can be squeezed into a tiny package. Also, the small sensor gives you far more reach for telephoto shooting. If I was a wildlife cameraman, I certainly wouldn’t be dragging around a Canon 5D Mark III and 16.5 kilos of 1,200mm f/5.6 fixed focal length lens with me!

Second is the codec quality that you get for the price. This is the method of compressing the footage to make it fit onto a card, drive or tape. For about £3,000, you could get a Canon XF-105 1/3″ camcorder that technically records using an HD broadcast-acceptable 50Mbps 4:2:2 codec. If you’re not into codec-speak, don’t worry about that last bit too much. It’s basically just a minimum technical standard that HD broadcasters will accept. As far as I’m aware, the cheapest “Super-35” large-sensor camcorder to record with an internal, HD broadcast-accepted codec is the Canon C300 which, at about £11,500, you’re going to struggle to call “affordable”. There are ways around this – using an external recorder like Atomos’ Ninja 2 or Samurai – but this adds extra fiddling that, on a fast-developing documentary shoot, might not be acceptable.

The third benefit that a lot of small-sensor cameras have, is that they actually contain three sensors; one for red light, one for green light and one for blue. Virtually all large-sensor cameras just have one sensor with different coloured pixels that capture the three different colours of light. The other colours are then interpolated (a posh word for “made up”) to give the final image. Having these three separate sensors does go someway to mitigating the inherent weaknesses that a physically smaller sensor (or sensors) brings.

Finally, there’s a caveat in all of this large-sensor love. Many of these large-sensor cameras use a very high resolution sensor, especially DSLRs. That is to say that, on a DSLR, the sensor is divided into vastly more pixels than are required to record the 1920 x 1080 grid that we currently call “full HD”. I’ve based a lot of my arguments on the larger sensor allowing for better high ISO shooting due to its larger pixels but, if the sensor is split up into more pixels, like the 36 million of the Nikon D800, the pixels may actually be smaller on a larger sensor video camera than on a far smaller sensor with far fewer pixels. There’s no such thing as a free lunch and those extra pixels could (but don’t always…that’s a WHOLE other post!) mean that you lose out on the high ISO benefit of that large sensor. Just bear that in mind, especially if the large-sensor camera is a DSLR which will always need more pixels to cover its still photography duties.

Let Me Know Your Thoughts

What do you reckon? Has the small sensor pro video camera had its day or is it here to stay? Has there been a situation, in which you’ve used a small-sensor camcorder, that a larger sensor just wouldn’t have cut it? Where does the Black Magic Cinema camera fit in with all of this with its big-ish sensor and uncompressed raw output? Can a slow superzoom lens like the Sony NEX-mount 18-200mm make your large-sensor camera suitable for fast documentary work? Leave a comment below and let me know what you think.

Right, I’m off. I’ve got to go and help Philip Bloom clean a 5D Mark IV.