As he bounds down Koh Lanta’s Long Beach, Dok Dek, a barrel-chested bundle of canine affection, looks about as happy as any animal can. His obvious love of life, digging and…well…everything, belies what he’s been through. He came into Lanta Animal Welfare as a very different dog. It’s hard to love life when someone’s poured boiling oil on your head.

Dok Dek’s ordeal is just one example of the many cases of stray dogs and cats that Lanta Animal Welfare, a charity based on the Thai island of Koh Lanta, deals with every day. “The primary focus of Lanta Animal Welfare is sterilisation,” Jon Corke, the charity’s General Manager explained, “but part of it is education. We’re trying to educate the locals that we’re trying to do the same thing; we want to reduce the number of stray animals too but our solution is sterilisation.” 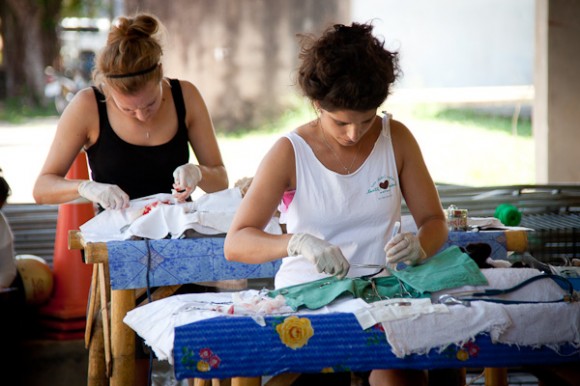 The charity was founded by Junie Kovacs who, on coming to Koh Lanta and opening Time for Lime; the first Thai cooking school on the island; quickly realised that something needed to be done for the huge number of stray dogs and cats present. To this day, the profits from Time For Lime are the lifeblood of Lanta Animal Welfare. It is this money, along with the generous donations of people like you, that has enabled the charity to treat over 5,000 stray dogs and cats since opening their doors in 2005.

It was an absolute pleasure to make this video and I hope that Lanta Animal Welfare’s great work with the stray cats and dogs of Koh Lanta is able to continue long into the future. If you know of a charity organisation, either in the UK or abroad, that would benefit from a video, photographs or a website, drop a comment below and I’ll see what I can do!